FREE UK DELIVERY ON ALL ORDERS ! 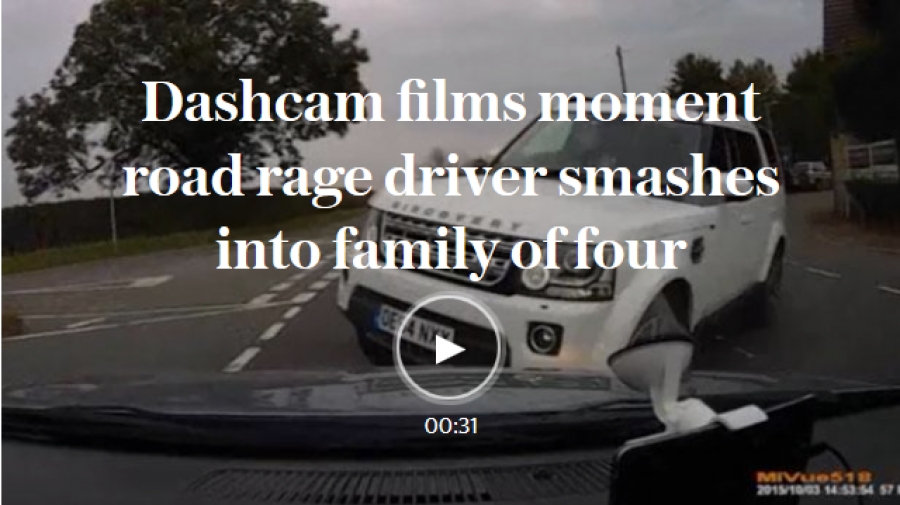 Harrowing footage shows the moment Andrew Nay, 39, pulled out of a junction in his Jaguar Land Rover and ploughed straight into their family car.

Harrowing footage shows the moment Andrew Nay, 39, pulled out of a junction in his Jaguar Land Rover and ploughed straight into their family car.

The video shows how Roberts had no chance of avoiding the collision that left his two daughters with life-changing injuries. Katrina and Karlina were both left paralysed following the devastating smash on the A509 near Wellingborough, Northants. Roberts also suffered severe injuries, including a fractured shoulder blade and nerve damage to his hand.

His wife suffered a broken arm as well as nerve damage.

The court heard Nay had been chasing a Mazda car from the A14 roundabout because he believed it had cut him up. Giving evidence, the female driver of the Mazda said Nay was aggressively tailgating and "bullying" her as he followed her vehicle. Matthew Rowcliffe, prosecuting, said the woman admitted putting her hand out the window and "sticking her middle finger up" at Nay as he was "less than a car length" away from her vehicle.

The court heard the woman overtook a Mercedes to put a car between the two vehicles but was not able to make much further progress up the road due to heavy traffic.

Fraser Hopes, the driver of the Mercedes, said Nay's Land Rover then began to tailgate him and in his rear view mirror he could see two men "smiling" and "having a laugh".

The court also heard Nay was an off-road Land Rover driving instructor and had 21 years at the wheel. Judge Adrienne Lucking QC said: "I have heard evidence from a series of witnesses travelling in the same direction as the Land Rover.

"In each case there evidence was given in measured terms, without exaggeration.

"By contrast I found the defendant's evidence unconvincing and inconsistent."

Nay was remanded in custody and will be sentenced today (Fri). Judge Lucking warned an immediate custodial sentence was likely.

After the case, Mr and Mrs Raiba, originally from Latvia, said their lives had been "completely shattered" by Nay's actions and that no sentence would be enough.

They said in a statement: "Andrew Nay's reckless actions had devastating consequences for our two beautiful daughters.

"Katrina and Karlina were happy, active children and he has robbed them of that. "We will never be able to forgive him.
"Every day they ask 'when will we start feeling our legs again?'

"They think it's going to get better and it's too hard to tell them."

Representing the family, Richard Langton, a serious injury specialist from law firm Slater and Gordon, added: "This is one of the most heartbreaking cases I have ever had to deal with.

"Nay was an experienced driver, yet his complete disregard for other road users has left two innocent children paralysed from the waist down.

"Because of him Katrina and Karlina face a lifetime of profound disability."


Link to The Telegraph article